A dark full-screen terminal window. That is what you see mostly on my screen. My fascination with the terminal started when I found out how to run COMMAND.COM on my parents Windows computer. What a joy! I could edit files with “edit”, start “fdisk” and explore the file system with “DIR”. I felt like one of those cool hackers from the movies! A few years later I was lucky enough to discover that Windows and COMMAND.COM isn’t the most effective way to work and I started to learn about Linux and Bash.

Nowadays I’m still using terminal windows to get stuff done. Until recently it really where windows. Many windows. My favorite shortcut on my Linux machine was Ctrl-Alt-t - start a new terminal. At work I’m using a Mac. My muscle memory contains key combinations to create terminal windows and switch between them on both systems. It was okay. It never really bothered me - until a colleague introduced me to “tmux” - the terminal multiplexer. 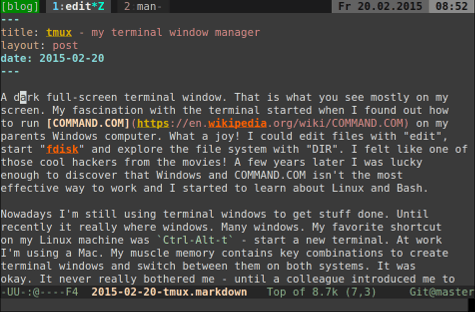 The idea of tmux is really simple. Instead of having multiple windows with one shell prompt each, why not have a single terminal window with many shell prompts. tmux saves me from opening a lot of terminal windows. But wait, there’s more!

You can split windows (horizontally and vertically), scroll and search through the terminal output, copy-and-paste from inside tmux, manage groups of windows and use it for remote pair programming. Interested? Then let’s get started with the vocabulary.

Windows, panes and sessions. Those are the building blocks. When I started to learn about tmux it took me some time to get the meaning. What helped me was to map the tmux concepts to those of my beloved terminal programs iTerm and gnome-terminal. 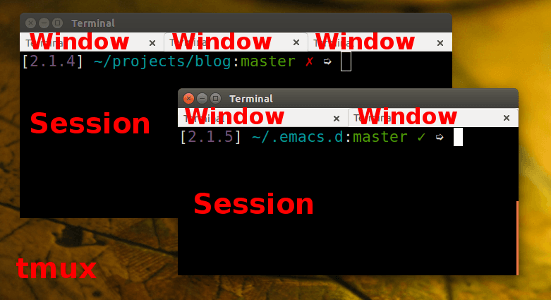 The first thing that my colleague recommended me to configure was the “prefix key”. It’s the key combination that tmux intercepts to recognize its commands. By default the prefix key is Ctrl-b. This combination is also used in Emacs to move one character backward so I ended up changing the prefix key to Ctrl-]. It’s easy to type on an English keyboard and not bound in any of the programs I use. In most posts about tmux you’ll see that people reference the prefix key as prefix instead of assuming that it’s Ctrl-b. I’ll do the same and write for example prefix c instead of Ctrl-b c (default prefix key) or Ctrl-] c (my custom prefix key).

If you haven’t done already it’s now time to start tmux and follow along. Reading about tmux is not as much fun as reading about tmux and immediately trying it. Just open your regular terminal program, install tmux and start a new session with tmux new.

Type prefix c to create a new window. At the bottom of the screen you see the “status line”. An asterisks next to the window name shows the active window. It should currently be the second one, because you just created a new window.

tmux starts to count its windows from “0” on. To switch back to the first window, type prefix 0. You can also used prefix n and prefix p to jump to the next and previous window. That enough with windows for now, let’s focus on panes. Close your “demo” window (prefix 1) by ending the shell process (exit or Ctrl-d).

To split your current window in two horizontal panes type prefix ". You can move to the next pane with prefix o. A very cool feature is to directly jump to a pane by typing prefix q (you’ll see numbers appearing in the panes) and then press the number of the pane you want to jump to (prefix q 0 for example). That feature blew my mind when I discovered it.

If you want to focus on one pane you can zoom it with prefix z. In the status bar you’ll see a “Z” appearing next to the window name. Press the zoom key again to shrink the pane back to its original size.

Vertically panes can be created with prefix %. Closing a pane requires you to end its process (for example the shell). If for any reason that process gets stuck (for example a dead ssh connection) use prefix x to kill that pane. Don’t worry about accidentally killing a pane - you’ll be asked to confirm before a pane gets killed. If you only have one pane, killing the pane means also killing the window.

Remember: Opening a new session is like opening a new terminal window. Unfortunately there is no default key combination to create a new session. You can get around it by going to the tmux command prompt (prefix :) and executing the new-session command.

The first thing that you want to do with your new session is to give it a name. Having a name for your session will make it much easier to differentiate between different ones. Press prefix $ to rename your current session.

Switching between sessions is easy: prefix s shows a list of session. You can use the arrow keys, Ctrl-n and Ctrl-p (Emacs keys) or the number of the session to jump to it. When you have more than two session in that list you’ll be glad that you assigned names.

To close a session you have to close all of its windows. You’ll exit tmux when you close your current session. Don’t worry though, the other session are still running in tmux. With tmux attach you can return to them. Speaking of attaching: Whenever you feel the need to exit tmux, you can press prefix d to detach tmux from your terminal window.

The session where I’m currently writing this post is named “blog”. I started two windows in that session: “edit” and “man”. The edit window contains two horizontally split panes. One pane running Emacs and the other pane running Jekyll. In the “man” window I’ve opened the tmux manpage.

I’m using sessions to arrange the different kind of things that I do. When I write code I’m created a new session for that project I’m working on. I use windows and panes for the compile output, manpages etc. The first window runs an emacsclient in most of my sessions.