This post is part of a series on reverse engineering mobile apps.

When you want to inspect an app’s behavior, the first step is to look at the traffic it produces. In this post I’ll show you how to do this with “mitmproxy”.

Fortunately, most apps encrypt their traffic nowadays. This means that you will have a hard time using a regular sniffer like tcpdump or Wireshark. Instead you have to do a man-in-the-middle attack to see what traffic the app produces. I’m using mitmproxy for this.

After you installed and started mitmproxy on your computer, you need to configure your phone to send its traffic through your computer.

On Android, this can be done by connecting both devices with the same Wi-Fi. Your computer needs to serve as a proxy server for your phone. This can be configured under “Settings → Wi-Fi”. Press long on the network you’re connected to, select “Advanced options” and put your computer’s IP address as “Proxy hostname” and the mitmproxy port as “Proxy port” (the default setting is 8080). 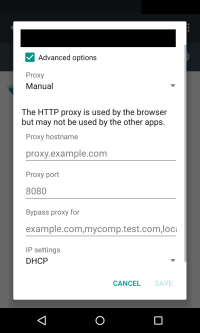 To setup mitmproxy for other platforms, have a look at the documentation.

Once your app sends its traffic through your computer, you need to get your phone to trust the mitmproxy certificate authority. This process has to be repeated every time you change the CA in mitmproxy. For Android, iOS and Windows phone, this is very easy. Just open the browser on your phone, visit mitm.it, select your platform and that’s it.

Now you can open the app you want to inspect and see the unencrypted traffic in mitmproxy on your computer.

If you don’t see traffic popping up or the app is not getting any data, this might have various reasons. Before assuming that the MITM attack failed, you should keep in mind that the data might be still cached on the device. For example, try “pull-to-refresh” or closing and reopening the app to force it to get fresh data.

It’s possible that the app doesn’t respect the proxy settings on the phone and thus escapes the MITM attack. This would be the case if the app still gets data and you don’t see activity in mitmproxy. You can use one of the other techniques to intercept the traffic, when you suspect that the setting isn’t respected.

It’s also possible that the app isn’t using HTTP(S) to get its data. I came across such a situation when I tried to inspect the traffic of the Threema app.

Threema opens a regular socket and implements its own protocol. Prebuild MITM tools can’t handle those situations because they know nothing about the protocol. Even though the apps traffic reaches the app, it can’t MITM attack it. Once again, simple traffic analysis doesn’t help here.

Although, traffic analysis has it’s limitations I still recommend it as a first step. It’s simple to setup and a lot of apps can be analysed in a short amount of time.

In the next post I will show you how to learn more about an app by looking at it’s binary. This post will focus purely on Android apps.